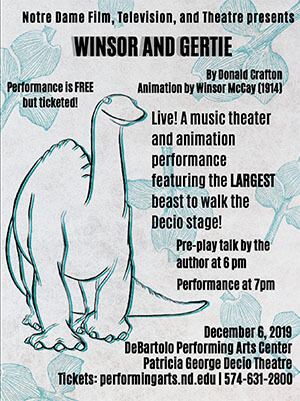 She’s a prehistoric dinosaur. And she’s adorable. The first masterpiece of animated cartoons was Gertie, the extraordinary achievement of American comic strip legend Winsor McCay. Using only pen and ink and thousands of sheets of paper—as well as his marvelous command of drawing and perspective—McCay brought his charming brontosaurus to life before enthralled audiences during the year 1914.

It was a mixed-media masterwork combining film and performance, presented as a live vaudeville act. The big beast eats, cries, dances the “Gertie Glide,” and obeys the artist’s commands—most of the time. Gertie the dinosaur’s temperamental yet charming personality was the prototype for all the character animation to follow—including that of Walt Disney.

Winsor and Gertie is a one-hour playlet written by prizewinning animation historian and Professor Emeritus at Notre Dame, Donald Crafton. Contemporary audiences will enjoy a behind-the-scenes peek into the McCay household during the creation of McCay’s amazing cartoon. We learn that juggling the demands of work, home, while pursuing one’s dreams was as difficult then as it is today. The fast-paced comedy includes an astonishing reconstruction of the lost vaudeville act—presented live on the Patricia George Decio Theatre stage, just like it was more than a century ago.

Winsor and Gertie is produced by students of the Department of Film, Television, and Theatre’s course, Media Mashups. Patrick Starner directs the play and Joshua Wang conducts the orchestra, playing an original accompaniment.