The Mighty Macs is based on the incredible true story of the 1971–72 Immaculata College basketball team that started in obscurity but became the original Cinderella story in women’s basketball. This team of pioneers went from barely making the inaugural tournament to the first dynasty in their game. And Coach Cathy Rush, the woman who was ahead of her time, became immortalized when she was inducted into the Naismith Memorial Basketball Hall of Fame. 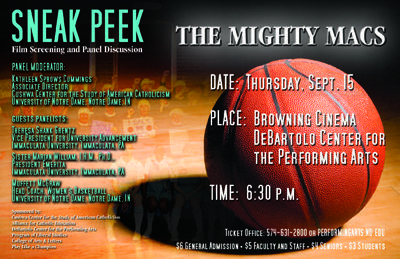 This event is part of the Women and Spirit: Catholic Sisters in America lecture series and gallery exhibit. A full listing of events is as follows. For more information, click on the event name.

This series is a project of the Leadership Conference of Women Religious. It is sponsored by:

For additional information, please see the Center for History website.