Reporter Theresa Bedell has built a successful life in the city. Finding time for a relationship, though, is hard and gets even harder after she agrees to a blind date with the friend of a friend. Tony is attractive and funny, but after a second date, Theresa decides not to continue the relationship. Tony thinks otherwise, and Theresa very quickly finds herself in a very uncomfortable role. Ultimately, she must figure out how to fight back and reclaim a version of her former life or face being erased by Tony’s actions. This 2000 premiere from Rebecca Gilman calls into question assumptions at the heart of romantic pursuit. 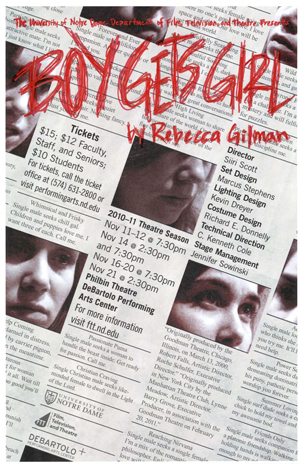 Tickets can be purchased online at performingarts.nd.edu or by calling the ticket office at 574.631.2800. Prices for tickets are $15 for regular admission, $12 for faculty/staff, $12 for seniors, and $10 for all other students.

Presented by the Department of Film, Television and Theatre.